Google’s animated halloween display on their search page has a witch stirring a cauldron that is on a fire. She is throwing things in the pot and bats, ghosts, and a large right hand are coming out of the pot. In Scripture, the RIGHT Hand is literally JOSHUA/JESUS/YAHSHUA, HE is the RIGHT Hand of ELOHIM [Hebrew word for GOD] and this is wickedness’s way of mocking HIM by putting HIM in a pot on a fire when she will be in the lake of fire for eternity! In Scripture, she is the harlot, the daughter of babylon, who is the mistress of witchcraft and sorcery. She is as real as satan is. Another name for satan is evil and another name for her is wickedness or wrongness, depending on the Biblical translation.

I saw another page on the internet with info on a big home display done up by someone consumed with halloween. He has big signs with the sun and its rays shining in the background and pictures of zombies, bats, etc on top of them. People do not understand the origin of symbols and what they are doing in regards to using them.  What this literally means is that the enemy is showing off the hold they have on each of us! The hold the enemy has on each of us can be stunning to realize when we examine our lives and see what we are loving and filling our homes and minds with and what we are doing to our bodies! By using the Bible as the study tool it should be, we can discern the TRUE ELOHIM from HIS enemy.

In Scripture, ba’al is the name of one sun god and it is another name for satan. The use of the sun as a symbol goes back to ancient sun deities. All sun gods are satan. All obelisks/sunpillars are symbols for sungod worship. The Bible says not to have these, Leviticus/Wayikra 26:1

Bats are unclean things as are rats, maggots, roaches, flies, etc. They are signs of uncleanness and in abundance, they are spiritual signs of possession.

Spiders, owls, cows, pigs, lilies, roses, and cats are tools/symbols of wickedness/wrongness and are signs of her spiritual hold in this world and in a person’s life [see some ancient deities and Biblical references].

Witches are wickedness the harlot and witchcraft is a sin per the Bible.

Dressing to provoke lust is a sin and is the harlot/wickedness.

Skulls/crossbones/skeletons are references to death.

Vampires are the dead and drinking blood is a Biblical prohibition.

Werewolves take a human and make it into an animal which is a Biblical reference for madness, men becoming animals [see the book of Daniel and what happened to Nebuchadnezzar], and is a sign of a possession – being taken over by the enemy.

Taking parts of humans and combining them with animals goes back to ancient cultures imagery of gods and their worship and ways. What ELOHIM created is pure, animals are animals and people are people.

The undead and zombies are references to death. Death is another name for satan so any reference to death or the dead is his realm.

Dogs, lizards, snakes, dragons, flies, sunflowers reference satan/death and are symbols and signs of his spiritual hold in this world and in a person’s life [see some ancient deities and Biblical references].

Ghosts are actually demons because there are no such things as disembodied human “spirits” per Scripture roaming the earth. A medium/witch contacting the dead is a sin per Scripture. There are Biblical references to sheol/gehinnom/hell and the lake of fire and being in the dust not roaming the earth or even going to heaven. There will be a 1st resurrection of the righteous and a 2nd resurrection of the dead according to Scripture.

People turning into monsters is another symbol of being taken over by the enemy and changing what ELOHIM created.

Black is spiritual darkness [satan/death] and his realm.

Purple is the harlot with some scarlet red [her tie to satan].

Scarlet red is mainly the dragon/satan.

Pagans use circles, spirals, triangles [pointing up references a man and pointing down a woman], and arches [there is even a Bible verse referencing arches in regards to the enemy]. ELOHIM uses squares, rectangles, and straight lines. A pagan altar in Megiddo is round while the altar Joshua built on Mt. Ebal is rectangular. The TEMPLE and HOLY CITY patterns ELOHIM gave use squares and rectangles. 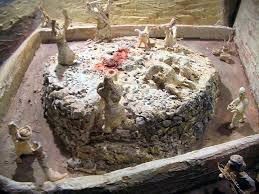 Our FATHER in Heaven, HIS SON – JESUS/JOSHUA/YAHSUA CHRIST/MESSIAH the LORD/YAH/YHWH, and the HOLY [SET-APART] SPIRIT are LIFE, the ONE TRUE LIVING ELOHIM, whose Way is SET-APART from all other ways and who is GOOD. The enemy is death/evil, and wickedness and things unclean or profane/common. Who are you worshiping? “Come out from among them and be ye separate, saith the Lord, and touch not the unclean thing, and I will receive you”, II Corinthians 6:1.