Food offered to or things polluted by idols can involve eating food that has been put on an altar like the Day of the Dead and St. Joseph’s Altars below or animals slaughtered to another god. These altars can be horrific looking or deceivingly beautiful and can include a wide variety of items: statues that take a human person and make an idol/false god out of them; skulls and skeletons; pictures of dead loved ones or those idolized; food of every variety; and even people dressing up as the dead or other personalities. Not only do these altars break the prohibition in Acts they also violate the 2nd of the 10 commandments, about not creating images to worship and bow down to. Remember also that the main definition of the word worship means to love. If you do not agree with what is said here, please ask our FATHER in Heaven in prayer for the Truth and for HIM to make it clear to you. Ask this in HIS SON, JESUS CHRIST the LORD’S/YAHSHUA HA’MASHIACH YHWH’S NAME, AMEN. See what HE lines up to answer you! 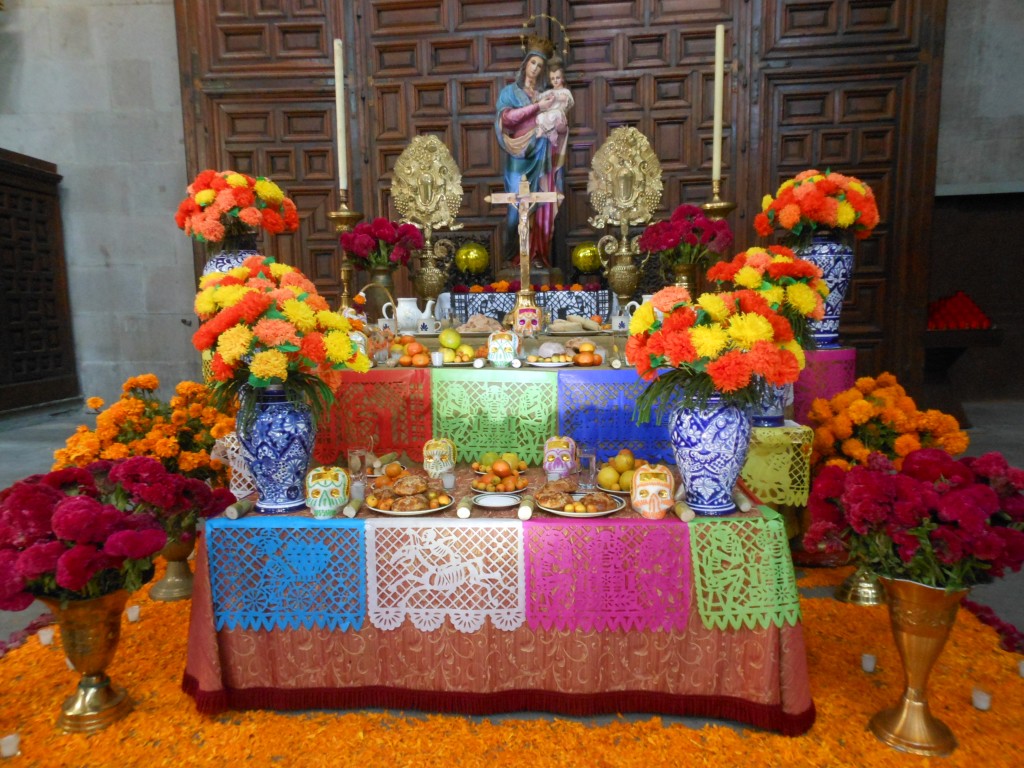 I attended a church service in Israel where a speaker was Umar Mulinde from Uganda. He had been Muslim but became Christian and also a minister. He was in Israel undergoing a series of operations reconstructing his face because he was attacked by Muslims who threw acid on him. After he spoke, he offered for sale a book he wrote about his story called, “My Conversion from Islam to Christianity”. Pages 50-54 go over Muslim slaughter practices. “Muslims slaughter the animals in the name of Allah, they recite an Islamic prayer over it, which automatically transforms the meat to become a sacrifice to Allah!!! Allah is not a Biblical name for God. As a person who learned Islam, I will boldly tell that Allah is much more different from the God of the Bible yet during the slaughter time, animals are made to face kabbah to the corner where an idol stone is in Mecca, Arabia and the animal is slaughtered as a sacrifice to Allah. This is entirely contrary to our Christian faith.” While the book was primarily talking about the meat industry in Uganda, this also applies to all Islamic butchers. What they do makes the animal a sacrifice to their god. Mulinde states that no Christian should eat this meat [no Messianic or Jew either]. Halal or hallal is a term used for what is permissible per Islamic law. Do not confuse it with the word “hallel” which is a Jewish prayer. See this link for more information  http://en.wikipedia.org/wiki/Halal

Halal is used on packages containing meat or meat broth and many other items and is found in a variety of stores including Whole Foods and even farmer’s markets. When in Natchez, MS I was surprised to see halal on packages of grass fed beef in the Natchez Farmer’s Market run by an extension of Alcorn University. It came from Kased Brothers Halal Meat Summit, MS. The Christians working at the market and bringing in the beef got defensive when I told them what halal meant and they did not want to hear what I had to share. Comments were made about their livelihood being hurt. I would not want to stand in front of GOD/ELOHIM and explain why I chose to disobey a command over money!

“Under Muslim law, Muslims are forbidden to eat pork, blood, land-based carnivores, omnivores, carrion, and intoxicants. The prohibition against pork is one of the most difficult aspects of a Muslim diet, because of the inclusion of pork byproducts in many foods. A long ingredient list may conceal a pork-derived product, so devout Muslims look for a halal label. In addition, there are restrictions on seafood; many Muslims believe that only fish with scales are halal, excluding shellfish and crustaceans as haram. The important distinguishing feature of halal meat is that the animal must be slaughtered in the name of allah. Any Muslim can slaughter an animal for food, as long as he or she slaughters the animal by quickly severing the major arteries of the neck, and utters the name of god as the animal is killed. Animals slaughtered in other ways are haram, as are animals slaughtered in the name of false gods, or animals who are not dedicated to any deity when they are slaughtered.”  The above amazes me. Islamic people are eating more according to Elohim’s word than many of Elohim’s own people – they don’t eat blood [or pork or shellfish]! This is very likely due to Ishmael learning all of this from Abraham before he and his mom were sent away. See these studies for more information:

Read Acts – blood is not food!

Acts 15:20 and 29, Gentile Christians can eat unclean things but not blood or…

The Messiah [Christ] is pretty clear about how HE feels about this. When HE is speaking to Yochanan [John] concerning the churches in Revelation 2:20 – “Notwithstanding I have a few things against you because you allowed that woman of yours Izevel/Jezebel, who calls herself a prophetess, to teach and to seduce my servants to commit fornication/sexual sin and eat things/food sacrificed to idols“. verse 23: “And I will smite/strike her children with death; and all the churches shall know that I am HE who searches the minds and hearts; and I will give to everyone of you according to your works [what your deeds deserve]. Also in Revelation 2:14 – “But I have a few things against you: you have some there who hold the teaching of Balaam, who taught Balak to put a stumbling block before the sons of Israel, so that they might eat food sacrificed to idols and practice sexual immorality.”. I encourage those who believe in grace/favor to the exclusion of all else, those who believe Paul’s words over what CHRIST said, and those who believe we are not under the law anymore to study what CHRIST HIMSELF said to the churches in Revelation, what HE said in Matthew 5 in the Sermon on the mount, and HIS other words in the Gospels and New Testament and compare it to what ELOHIM told HIS people not to do in the Old Testament.

Something else I would encourage any congregation to do because of issues I have seen. If you are offering a meal, please make sure that dishes are labeled as containing meat or meat broth for those who do not eat meat and please go a step further and list if it is kosher slaughtered meat or USDA or halal Arab slaughtered meat. I have attended functions where I could not get that information or I was told it was kosher but after inquiring further, I found out it was not kosher slaughtered so I did not eat it or just did not eat it because I did not know for certain. I even found out some seasonings have meat base in them! Others nearby also were unhappy to hear what was told me, unfortunately because they were eating it. I had people tell me that everything was kosher and then later I found out that nothing was as they had said. This is serious folks. If someone is a vegetarian or has made a vow to GOD/ELOHIM based on the verses in Acts please do not take it lightly even if you feel differently. Remember, you may be accountable to GOD/ELOHIM for every word/action/thought if you are not in the resurrection of the righteous. Going a step further, do right by the Bible and what the HOLY SPIRIT told James/Ya’akov and Peter in the book of Acts. This is in the New Testament and Paul also honored this in Acts but changed in later writings because of men, examine the Scriptures it is all there. Share the truth with your congregation and stop eating meat with blood in it or Arab slaughtered meat. I believe you will be blessed.

Other Scripture which applies are the following:

B’midbar [Numbers] 25:1-2, “While Israel lived in Shittim, the people began to whore with the daughters of Moab. These invited the people to the sacrifices of their gods, and the people ate and bowed down to their gods.”

Sh’mot [Exodus] 22:20, “He who sacrifices to any god, other than to the LORD alone, shall be utterly destroyed.

Sh’mot [Exodus] 34:15, “lest you make a covenant with the inhabitants of the land, and when they whore after their gods and sacrifice to their gods and you are invited, you eat of his sacrifice,”

Tehillim [Psalm] 106:28-29, They joined themselves also to Baal-peor, And ate sacrifices offered to the dead. 29Thus they provoked Him to anger with their deeds, And the plague broke out among them.…

Hosea 9:10, I found Israel like grapes in the wilderness; I saw your forefathers as the earliest fruit on the fig tree in its first season. But they came to Baal-peor and devoted themselves to shame, And they became as detestable as that which they loved.

Remember, always put GOD/ELOHIM first over what other people do/think even if you face rejection [which CHRIST warned about and said we would be rewarded for]. Ask HIM for help with your will and desire if it is different then HIS. Ask HIM if HE would consider changing HIS Mind about something, too [you do not know till you ask!]. Seeking the TRUTH is a journey and putting HIM first can be a process of getting Egypt out of us [like the Israelites] but worth the effort to get to that level of righteousness with HIM!